Some Q&A about my first week in the United Arab Emirates.

TGIF has a whole new meaning in the UAE – people are literally thanking God on Fridays as they go to the mosque for mid-day prayer after a long Sunday to Thursday workweek. Though I doubt the TGI Friday restaurant chain had that much forethought when they opened up shop in Dubai.

Isn’t Abu Dhabi where Garfield would send Nermal?
Yes, Abu Dhabi is where Garfield would send Nermal – and sometimes Odie – by airmail. It is also the capital of the United Arab Emirates, a country composed of 7 Emirates including Abu Dhabi’s famous cousin, Dubai. His Highness Sheikh Khalifa bin Zayed Al Nahyan is President of the UAE and Ruler of Abu Dhabi, and Abu Dhabi is governed by His Highness Sheikh Mohammed bin Zayed Al Nahyan, Crown Prince of Abu Dhabi. 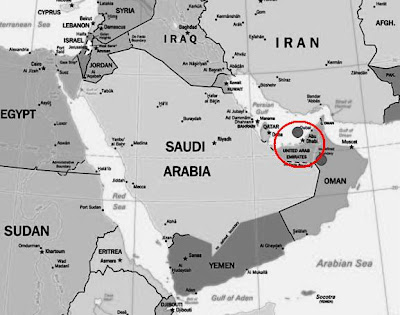 How far is Dubai?
I went to Dubai this weekend, and it took about an hour to drive there. Though the UAE is one country, each Emirate enjoys a great deal of autonomy. While Dubai has invested heavily in tourism and has deregulated real estate such that foreigners can own property in the Emirate, Abu Dhabi is more government and industry focused, where only Emiratis can own land. Dubai is a collision of new meets old, east meets west, where the “locals” are filthy rich and are the last people you find on the streets. Scattered “downtowns” of new developments compete along the highway with few pedestrian and road connections between them where social life is concentrated in the towers, while the fantastic older city is centred along the creek, with a great number of ferry and pedestrian connections between the various souks and other centres of migrant worker street-life. We arrived at mid-day on a Friday – prime prayer time – and it was thrilling to see the streets of Dubai at their most social hour.

Do you have to wear a headscarf?
The UAE is a very liberal country, and I have felt even less threatened here than I did in Turkey and Morocco – also very liberal Islamic countries. The UAE is composed of 80% foreign nationals, and women’s style of dress reflects this – women dress in anything from a head-to-toe black Burqa, to very tight clothing with a headscarf, to knee-length skirts and a tank top, and Indian women where saris. Emirati men all seem to wear their traditional white Arabian draped clothing with a white head piece.

Where do you live?
I’m staying at a hotel until I sufficiently furnish and move in to an apartment that I’ll be sharing with an American woman in a downtown district. The other three planners all live in the same building about 20 minutes away from my future home. The hood I’m moving into is very Pakistani, and everyone is super friendly. As Aaron says, in the absence of a communal language, the currency here is sweetness.

What’s work like?
The working week is Sunday through Thursday, with Friday and Saturday being our weekends. Our office is a new branch of the government that is still being defined, named, and housed. There are three bosses in our office [two Emirati, and one Australian], four planners [2 Canadians, an American, and an Aussie], and about a dozen managerial, administrative and support staff members, including local, Lebanese, and Bangladeshi nationals, with about as many women as men. We also have a team of consultants from Boston working in our office for the next year, three of whom are permanently based in our office in AD and are staying at the same hotel is me. Lunch is the major meal of the day in the UAE, and we eat lunch communally in the afternoons together, usually Lebanese food. If my name wasn’t difficult enough, I share an office with an Australian planner of Greek origin.

What’s daily life like for you?
Everything feels familiar and normal for me here, but in reality, it’s far too soon for me to accurately describe daily life here. I have described the city as a paved Morocco, while others have described it as Texas meets Tehran. There is no alcohol in the UAE, except at hotels [that said, we still managed to find a 2-for-1 margarita happy hour this weekend at a Tex Mex restaurant on the ground floor of a hotel in Dubai]. It’s very very hot, generally 40-50 degrees Celsius with 40-80% humidity. Before our epic walking tour around Dubai yesterday, I hadn’t spent more than 15 minutes outside in the heat at a time, and my colleagues with whom I was travelling with seemed to concur. I estimate that yesterday was the most consecutive hours I’d ever spent in sweltering heat in my lifetime – in Japan, I’d duck into a convenience store for 10 minutes just before reaching the threshold of being desperately overheated. Yesterday, I surpassed that threshold pretty quickly, and spent most of the day almost numb, wondering how there could be any more liquids inside me left to sweat. But it was absolutely worth it – a Friday to thank God for.