I associate excessive doses of sun with having a tan. I have been in perpetual summer since February 2006, after all — that’s 15 months and counting. I think sun=tan is a reasonable association, and yet contrary to popular belief, I am not very tanned. Every time I see someone I know I seem to get the same reaction.

Wow. You really aren’t very tanned. Haven’t you been in Africa the last 7 months? 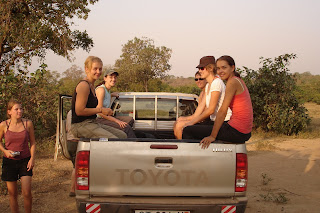 1. GHANA. I worked as a Community Development Planner for 6 months in Ghana. Half of my time at work was spent in my office, a quarter of my time was spent at workshops, in meetings, or at public sensitization events, and the last quarter of my time was spent in the field monitoring and evaluating projects. Ghana is extremely hot, and Koforidua is the capital of the most humid part of the country. And no swimming pools to quell the heat. I’d manage to get most of my desk work done in the mornings, when my office was cool enough to think. After lunch, it was too hot to sit at a desk, and I’d usually retire to one of the two air conditioned offices in my building and socialise for the rest of the day. In the late evenings, hours after the 6pm sunset, it’s hot enough that basic un-animated conversation provides enough activity to sweat profusely. Fanning oneself produces more exercise and heat than the cooling effects of the mild breeze your producing. When on site visits, I wore a hat, sunglasses, sunscreen, and covered my skin with something to protect it from the burning sun, and still never lasted more than a few minutes before having to head for the shade. It’s HOT. Not in a nice warm blanketing way, but in a painful, retina-burning, planning-what-to-wear-such-that-you-don’t-sweat-through-your-outfit, hammering down on you, kind of way. I always wore a hat outside and drank copious amounts of [yuk!] water, and still had heat stroke twice. In fact, the darkest my hair has ever been in my life as a blonde was at the tail end of my time in Ghana.

2. SOUTH AFRICA. My Ghanaian friends had told me that the reason there are so many whites in SA was because the climate was just like in Europe. I arrived in Jo’burg in late summer with very high expectations, and was very very excited to wear long trousers for the first time in 7 months. My friends in Ghana had never seen me wear trousers before. I spent a whole day at the poolside – not just 10 minutes of sun before having to retire to the shade – and then off to Cape Town. The Cape Peninsula had some of the most beautiful and inviting beaches I’d seen before, and the strong breezes made even the hottest of days feel very mild.

Inland in the wine country, the air was dry and the heat soothing, and it was finally possible to hit a terrasse in the sun. Finally I was going to get the tan I needed before my return to the temperate world. I didn’t have any freckles, but my cheeks were pink…then darker pink…then red. Was I burning? Should I put on my hat? No, it’s just the South African red wine we were enjoying — enjoying enough that you could read it on our cheeks. 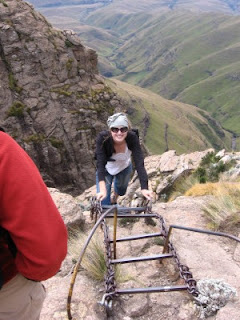 SA’s most famous beaches surround Durban, but floods in Mozambique and along SA’s east coast pre-empted any beach ambitions we may have had. Instead, we headed for the hills – the Drakensburg, to be exact, where we climbed up to 3200 metres. This was the closest I’d been to the sun in a long time – although I lived in the “mountainous” region of Ghana, none of those “mountains” even compared to Burnaby Mountain, which we Simon Fraser alumni always referred to as “the hill”. SA’s mountains, on the other hand, were very impressive, and we returned from our expedition up the Drakensburg with a respectable shade of skin for someone who claimed to have been living in Africa for 7 months. After spending 4 hours out to sea great white shark cage diving, parasailing on the Garden Route, climbing the Drakensburg, and going on a 5-day camping safari in Kruger National Park, I was finally exhibiting the 7 months I had spent in Africa.

3. ENGLAND. When I left Canada in August, I packed for 7 months in Africa. I knew I’d be in Europe too, but figured I’d cross that bridge when I got there. And besides, how cold could it be? It was April.

-If you need to borrow any of my coats, help yourself. Oh. And I have an extra pair of gloves for you too.

Gloves? I had bought no less than FOUR scarves/shawls in Ethiopia, anticipating the European cold. I had lost my hat somewhere in the Indian Ocean, a sacrifice to the Gods of shark cage diving, and all I had was a thin safari jacket and four scarves/shawls. I had entirely forgotten about gloves. And I suffered for my thoughtlessness.

4. ITALY. I used to have freckles when I was a kid, but hadn’t had freckles since 2003 when I lived in Turkey, a summer where I spent 16 weeks in persistent, unyielding sunshine. I assumed I had outgrown freckles and was old. It was just another reminder that life peaks at 27, wasn’t it?

-Actually, freckles represent damage from the sun, so it’s probably a good sign that you haven’t had any freckles since 2003.

The temperature in Italy was excellent – it was the perfect temperature to walk around all day without needing to bring an extra bag just to put all your excess clothes into. Montreal springs are always like that – you need to pack for everything between +28 and -15, sweating underneath your spring jacket while the sun is up, and then catching the flu in the evening as the temperature drops by 5 degrees per hour, every hour after sunset. The same day I remarked about my lack of freckles since 2003, I came back to the hotel after a long day of siteseeing and noticed the appearance of freckles on my nose and cheeks! It was a lose-lose battle – sun-damaged skin, or feeling past my prime?

Italy was perfect – cool enough to be comfortable wearing proper walking shoes, but warm enough to eat gelato every evening for dinner. The sun was soft and embracing, not stinging and hammering, and just the right temperature to enjoy my daily half litre of wine on a sunny terrasse in the late afternoons.

5. MOROCCO. I arrived in Morocco dawning blonde hair, freckles, and a respectable tan – or as respectable a tan my Northern European self can get. I couldn’t pass as a local, but I clearly wasn’t some fresh-off-the-boat European tourist, inexperienced in the ways of Africa. Or maybe it was my permanent aura of un-approachability I exude when travelling in pushy countries. I spent 3 days in the Sahara desert and in the Atlas mountains, under patchy clouds perfect for photography. I thought I was going to the big sand dunes, but was instead at Zagora where the dunes were barely high enough to act as toilet camouflage.

I arrived at Ando’s apartment in Casablanca exhausted and lethargic. In fact, I think Ando’s quite disgusted by just how little I can manage to do in a day, but still feel good about myself. In 4 days in Casa, I hadn’t left more than a 3 block radius from Ando’s pad, and my bronze was fading.

Finally, she managed to drag me out for a day on the town – we went to the medina, I bought two tapis, and we went to the market and bought camel meat from a meat store that had a freshly slaughtered camel head hanging from it [yes, of course we took shameless pictures of ourselves standing behind the camel head, which conveniently hung at my shoulder length]. We found someone to grill our kilo of camel meat for us on the side of the road, went to the beach, and then we finally went to the hammam.

At the hammam, you sit in the steam room for an hour painting yourself with a seed ingested and defecated by a goat, and then a woman comes and scrapes all your dead skin cells off. She actually stopped halfway and showed me just how much grime was peeling off me. All I could do was shrug, conveying the international sentiment of “what are you gonna do?” — passive acceptance of one’s own disgustingness. 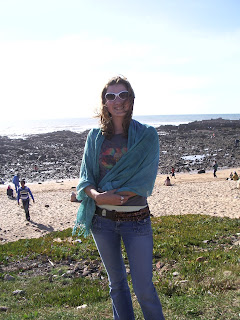 I emerged from the hammam satisfied that I had finally managed to get myself clean since taking that 6 hour tro-tro to Bui National Park last January [see blog entry “Ando can officially sleep anywhere”], realizing that maybe I had had a tan underneath all the layers of dust afterall. If only I could get my clothes as clean! [I really just want a box of chemicals and a machine to wash my clothes at this point]

In any case, along with the layers of dust, she had certainly managed to scrape off whatever progress I had made in my plight to actually look like I had been in Africa for 8 months now. I didn’t see any women at the beach wearing swimsuits, and I’ve been pretty careful about not exposing myself too much while I’m in Morocco, so I don’t know how much sun my skin will actually see while I’m here. I guess I’ll just have to wait until I get to Spain and Latvia before I can have my African tan!